“Do I have a legal obligation to prevent bird deaths at my building?”

Yes. There are laws in Canada that protect birds, from both intentional and unintentional harm (such as collisions with buildings).

“How are birds protected in Canada?”

Most species of birds in Canada are protected under Canada’s Migratory Birds Convention Act (MBCA). The MBCA and its regulations prohibit the intentional or unintentional harming, disturbance or killing of migratory birds, as well as their nests and eggs. In addition, under Canada’s Species at Risk Act (SARA), it is illegal to harm or kill a federally listed threatened or endangered species. Several federally protected Species at Risk, including Canada Warbler and Wood Thrush, are frequent victims of window collisions. The MBCA and SARA protect listed bird species anywhere they are found in Canada. These laws apply to everyone, whether you are an individual, a corporation, or a level of government.

Provinces may have additional laws that protect birds. For example, the Environmental Protection Act (EPA) in Ontario provides for the protection and conservation of the natural environment. Reflective light from windows that kills and injures migratory birds is considered a ‘contaminant’ under the EPA and discharging it is therefore an offence. 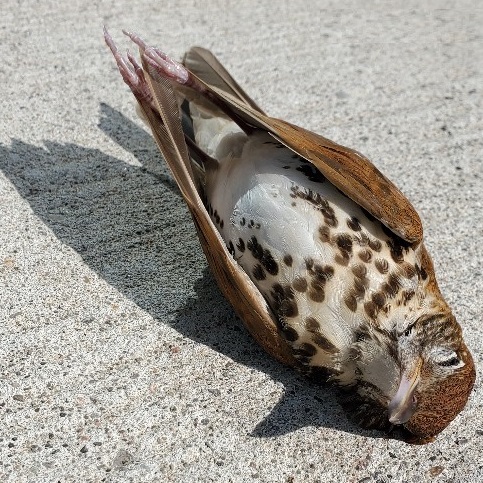 “What risks do I face if I do nothing?”

Building owners who cause or permit the killing of birds, even unintentionally through untreated glass, face real legal risks. They may be subject to investigation by their provincial environmental agencies and/or face legal prosecution. An individual or corporation can be convicted for failing to implement reasonable measures to protect migratory birds from harm caused by their operations.

Two prominent legal cases concerning bird-window collisions at commercial buildings in Toronto have highlighted the risks building owners face if they do nothing or make only minimal/ineffective efforts. The ruling in the 2013 legal case showed that owners or managers of buildings that kill or injure birds can be found guilty of an offence under the EPA or SARA, if a Species at Risk is involved.

“In Ontario, the law is now clear: owners or operators of commercial buildings that reflect light that deludes birds into fatal or injurious collisions are in violation of the law. The federal Species at Risk Act is equally clear: the unintentional killing or injuring of listed (Threatened or Endangered) bird species in collisions with reflective windows of commercial buildings is an offence.”

“How can I protect myself?”

It is your responsibility to know which laws apply and to exercise due diligence in avoiding harm to birds. Learn about bird-safe practices for your building.